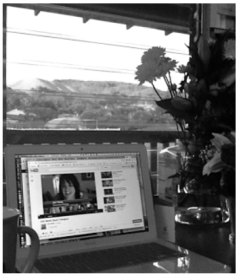 Through the window of a MOOC I am reliving the anxieties of academia, for no good reason. This idea of being among, yet wholly invisible, or worse, marginally visible, is unsettling. Of course, especially in a MOOC, it seems to all be in my head. After all, being visible is a matter of stabbing chaos and being invisible is one of the gifts of technology. Invisible meaning being present but not identifiable. in a class of 42,874, what are the chances of interaction with a teacher? And is that important in education? Hamish MacLeod made a comment on the E-learning and Digital Cultures MOOC Google Hangout today, that there was a conscious decision to run the class without recorded lectures or “talking heads” and that he felt that this was because they “didn’t want to privilege the position of the teacher.” … I wrote that one down.

This comment caused an explosion of inquiry for me:

-What does that mean to the idea of the role of teacher?

-What does that mean to me as a face-to-face teacher, elementary teacher?

-What does that mean for face-to-face professors, often in large university classes?

-What does that mean to me as a student in a MOOC?

-What does that mean to the idea of the role of a student?

The Role of the Teacher

Watching the vision of education in Corning’s “A Day Made of Glass” commercial, the role of the teacher strikes me as lacking innovation. Is that just because it looks like the typical role that teachers currently play and I am assuming that such a role should be improved upon? The video contains technology, lovely technology and visions of impressive learning, but those only in scenes outside of the classroom. Where is “the teacher” while the students experience a virtual dinosaur as the explore the redwoods face-to-tree? I wondered how Corning could have envisioned the role of the teacher with a greater sense of innovation. How would I? Is the teacher only a designer of opportunities, does the teacher need to be in relationship with the student, or is the relationship with the learning materials and experiences everything the learner needs?

If I stand in front of my class and students are in a culture to respond to such positioning, does our physical proximity still make this a privileged position? Certainly I do feel privileged to stand there! Does a face-to-face environment offer a flexibility of learning stances that is not available online? As a face-to-face teacher of young students, in a fairly small class setting, I can facilitate the learning as direct instruction, group exploration, as well as independent reflection and practice. We can focus in multiple dimensions with multi-sensory experiences. Even so, does my role as a teacher who will consistently have moments of talking head, mean that I have usurped a privileged position over the others in the room, the students? Does my ability to know personalities and create relationships validate my role?

If an instructor is in an auditorium with hundreds of students, is there any other option but to be a talking head? Somehow Michael Wesch has created some sense of community out of an auditorium, but did he create relationships? Does it matter?

From my leaky memory: Garrison Keillor once commented with some resentment on a writing professor. It seemed that the professor did not interact with him positively when he was a student, which Keillor seemed to take as a comment upon his perceived worth as a student. When Keillor become successful he had an interchange with this professor who simply stated something to the effect that he was there to be Keillor’s professor not his buddy. Keillor seems to acknowledge this with a forced acceptance. Yes, Garrison Keillor became a successful writer anyway. Did that professor meet his responsibilities as a teacher? Are adults “cheated” as learners? Does an expectation of mature agency make relationship unnecessary or unimportant to learning?

In a virtual group of enormous proportions, would messages from a “talking head” take away or add to my experience as a learner? Is a Google Hangout with a backchat more valuable? What is the ideal the role of the teacher in a MOOC? I enjoyed watching the interactions between our MOOC professors, the candid inflections of the conversation, and the influence, if a necessarily minute reflection of the “class”. If I had to choose, I would take the Google Hangout. I would also enjoy some talking head opportunities, as to some degree, I felt that some depth of thought may have been compromised through the dynamic nature of conversation versus what could be considered story telling. Learning from my classmates is clearly a desired goal, but I can’t get away from a sense that I want a relationship of teacher and student. I found myself wishing that I had been more active in the course conversations just to win the lottery of being mentioned by a professor in the Google Hangout. I ashamedly asked myself why I felt this way. Among admitted interest in intellectual validation, was the larger desire to have a sense of relationship, a palpable context for learning.

Who’s on Second? Is it the Student?

The role of the student becomes more complex when one is actually a student. As a student I long for both the active and the passive simultaneously. As a motorist I often feel frustrated by pedestrians, as a pedestrian I am indignant of motorists. Perhaps it is my Gemini nature to have split personalities, but I think that perspective is a powerful and slippery reality. I can know intellectually that all students have a desire to learn and are capable of agency, but there are times when my devilish teacher brain counteracts that paradigm with concrete the evidence of a student not performing. If this is the case in face-to-face learning environments, what does it mean for online education? In this E-Learning and Digital Cultures MOOC, there are Massive numbers of faders and lurkers. On one hand, as a teacher, what it is the responsibility of the teacher to bring these groups into participation? On the other hand, I have found the acceptability of lurking and even fading comforting. Is the role of the student primarily the responsiblity of the student? Where education is concerned, is the role of the student lacking “privilege” and if so what would privilege look like, or of more interest what would the results be? Of course (or perhaps not “of course”), that varies with the age, subject, and goal of the learning. What do our K-12 practices say about the role of the student? Was Dewey on to something?  Hee, hee, ya think?!  And here I place the intellectual ellipses, as it is all downhill from here…

For, if I had more time, I would make this shorter -but then perhaps I would wait another two years to blog. If I participate in this MOOC in no other way, I hope that I will participate by being willing to have these discussions with myself or any others who care to join me!